Now we will try some Baby Steps with images in Blot.

I made a folder in the Blot folder inside Dropbox called Images, except it has an underscore as the first character, before the Images part, _Images. That makes it a public file, according to my limited understanding. Then I plopped an image in there, a 244 X 340 jpg file, and made the usual markdown text for an image, you know, the one that starts with an exclamation mark. But the URL for the image is not the usual path to a place on the Internet. Instead it points to that folder using /_Images/Tintin & Snowy.jpg. I think the geeks call it a relative path. I copied the format from the Blot help file on Formatting blog posts. Look down near the bottom. I saved the file as a draft and the image looked great on the preview of my blog. This experiment took about 30 seconds and worked on the first try. 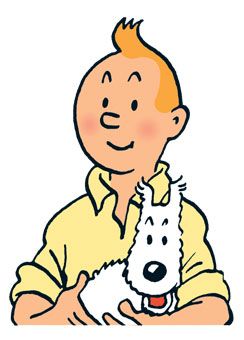 I could use the URL pointing to the image on the Internet, where I actually stole it. If I put that super long URL into my markdown image text, I get this: Looks the same, right? But the second version is subject to linkrot. If they move that image, it disappears from my blog. So downloading the file and using the relative path link to my Blot folder with the images is far superior. PLUS all my images will be there in that one folder inside my Dropbox Blot folder. That just feels so simple and elegant to me. Of course you have to make sure the image isn’t restricted by copyright.

I learned about this Tintin character while chatting with Nitin Khanna on Microblog last night. His unofficial nickname in his family is Tintin, because his actual first name has that “tin” in it. So he uses one of the Tintin images as his profile image. I told him, “I think it’s a very clever selection of a profile image: playful, fun, revealing something special about you.”

Having been introduced to this cartoon character, my next impulse was the same as always: look for used books on the subject. Well there are a lot, which is not too surprising, as “The series was one of the most popular European comics of the 20th century,” according to Wikipedia. As you can see, some of them are rather pricey.

Where Are You From? When I went to college, it was the first time I had been out of my home town on my own for any extended period of time. There was only one other

Using Footnotes in Blot I’ve been working my way through the various features of Blot, taking Baby Steps, and having a pretty easy time of it. After it was so easy to get