All About the Convert to HTTPS Button

I started using the Internet in the early 1990′s with a dial-up modem and a bulletin board system. They had Usenet there and I quickly discovered rec.music.dylan, the first music Usenet group. Suddenly I could easily communicate with kindred spirits all over the world who also knew about Bob Dylan and loved his music. This changed my life for the better and it soon led to my being asked to develop a bibliography of books by and about Bob Dylan. That sounded easy enough. I figured it might be fifty books or so. No one told me what format I should use. That was up to me.

Tim Berners-Lee (now Sir Tim . . . ) had recently invented the World Wide Web and somehow I learned that the key to all the cool linking was HTML. One day in Fry’s, I came across Laura Lemay’s book, Teach Yourself Web Publishing with HTML 3.2. I leafed through it. It didn’t look hard at all, and soon I decided this would be the format I would use for my Dylan bibliography. I typed the whole thing into a simple text editor, adding the tags from Lemay’s book and finished up the first version sometime in 1995. Mind you, I was earning my living as a pretty darn good tax accountant, a career I started in 1976, doing bookkeeping using input sheets and an external service bureau at first, but then with an Apple II+ by mid 1977 or so. Bob Dylan’s music was a strong interest of mine, but I was not a computer programmer, though I had some friends with such skills. I did the whole bibliography on my own by following the instructions in that book. It was easy, but pretty time consuming, as there were far more than fifty books to compile, about ten times that many at first, then twenty times the fifty, and even more now.

This experience was super empowering to me. It gave me a lot of hope for the future of information. By being a fairly adept computer user, I could gather this huge pile of information, organize it in a good way and make it available to anyone in the world with access to the web. Which is what I did. I had to pay Netcom that had the server that held my hundreds of text files, but otherwise, I was totally on my own to put whatever I wanted into it. I freely provided the information to the world and especially the Dylan community. This was years before Bob Dylan or any other musicians had their own official websites. It was also before Google, Facebook or Twitter even existed and before the Internet was a platform for making money. The computer meaning of the word “silo” had not yet been invented. 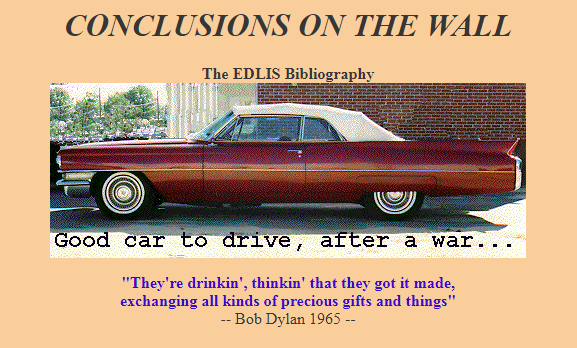 My website is still there, like a relic of times past. Wikipedia has a page listing websites founded before 1995. It’s not a very long list, though surely not comprehensive. My site was first published the next year and it’s still there where I put it. One article in 2015 said that the average lifespan for webpages is something like 100 days. In the late 1990′s the typical webpage lasted for around 44 days. I kept my website up because even though Bob Dylan was not awarded the Nobel Prize for Literature for more than another twenty years, I knew, even back then, that his life work was important to our culture and was worth preserving.

Soon Google will begin to warn visitors to my site that it might be dangerous and folks would be smart to hit the back button in their browsers and avoid it. Again, when I first published, “googling” something was not even a word. The most powerful search engine in those days was Alta Vista, a name which I always thought had a nice ring to it. But now the giant Google acts like it is the King of the Internet, rather than Amit Kataria, making the rules for us to follow. My website is an HTTP site and always has been. Now Google doesn’t like that, but Laura Lemay didn’t teach me a thing about HTTPS and didn’t warn me how dangerous my handiwork might be.

As far as I know, in the 23 years my website has been there, it has not caused any harm to any computer, computer network or computer user on the planet. None, nada. It simply hands out accurate infomation about books, when people request the information with their web browsers. I’m pretty sure that’s what Berners-Lee had in mind when he invented the web. It is a totally static accumulation of text files. Probably 95% of the links I created still work, because they are all internal links, pointing from one page in the bibliography to another. I did it that way on purpose, because I wanted it to last. Near the end of my work on it, I added ONE page with external links to other Dylan related websites. Many of those are now dead links. I have not bothered to update that one page over the years and it does not even have a link to Dylan’s official website, because bobdylan.com didn’t exist when I first created the page with the external links. The only thing you can do at my website is read about Dylan books. There is no discussion area, no place to leave comments, no books for sale, not even a proprietor at home to answer a knock on the front door. In fact there is not even a front door! There are no user accounts in the website. I can log in to my account at the hosting service, though I haven’t done it in many years. It might be considered a useless relic of the past by some, perhaps some might even think it has been abandoned. But it has not been, because it contains information on 544 Dylan books and many of these books are being read every year by people interested in the subject.

Was Goggle elected by Congress or some international body as the arbiter of what is permitted on the Internet? Probably not. When I first learned about this plan to begin to warn people about the dangers of my website, I naturally did a Google search and found a lot of pages with very technical discussions on Internet protocols, full of Internet lingo way beyond what Laura Lemay had taught me about. Back then it had been easy. Now it has obviously become super complicated, a huge industry where tons of people make a very good living creating the Web, and outsiders like me are excluded a voice. And in recent years, I also learned that the free Gmail account that Google so generously provided to me was actually a tool they could use to sell information about me to advertisers. I have never tried to make any money from my website, but Google wasn’t sitting around being altruistic. They were out making gigantic annual profits, some of it stemming from information in my emails. I no longer blindly trust their actions as being in the best interests of the Internet or our culture.

I still don’t understand how my website has become so dangerous. I have recently searched for simple language that will explain the danger it is creating, but without success. There doesn’t seem to be anyone who actually cares whether I understand about this or not. The world and the Internet have moved on. Now big businesses use it to generate billions of dollars of income each year. The technical people who make this possible enjoy big paychecks and communicate among themselves with their own special language and technical jargon that puts them among the elite, an unelected ruling class in our culture today. I’m not a part of that elite class of people. But you know what, I still have the best website with a Bob Dylan bibliography, even though it is now two decades out of date. Many of the books there are still important books on the subject, even though there are also tons of other important books on the subject that have come out since May 1999, the end of my active work on that website. One day I will publish a much more comprehensive bibliography. And maybe I should encrypt it, so no one can read it.

Google’s new attacks on HTTP came up recently on Micro.blog, mostly a criticism of Dave Winer who has spoken out against this program Google has engaged upon. Dave has always seen the Internet as an opportunity for many voices. Years ago he even dreamed about making it possible for poets to set up their own servers and write anything they wanted to write. In his companion podcast, he said, “It’s time to stop thinking about these servers as being things for geeks, and start thinking about them for people with ideas.” And he’s still talking about wanting to make it “easier and easier for people to run their own web servers.” That’s what I did in 1995 with the help of Laura Lemay. But the Internet is now a platform for the super nerds, except in the silos like Twitter and Facebook, which is why they are so popular with regular folks. This is the truth.

As Dave points out, the technically elite who support this Google plan, talk about how it’s really easy and inexpensive to convert an HTTP site to HTTPS site. One user on Micro.blog wrote, “I have a few domains. They all terminate in the exact same Caddy instance, which uses vhosts.” He went on to say that Dave could easily convert all his domains to HTTPS. All he would need to do would be “to copy & paste a 10-line config for each domain in order to put Nginx or Caddy in front of it.” See, really easy!

But for me, I have no idea what a Caddy, vhost or Nginx is. Should I Google them and learn all about them? How many hours would it take me to learn what those words mean and what they have to do with the danger caused by my 23 year old static website? Didn’t I do enough in the hundreds of hours I spent compiling and formatting the information for my Dylan bibliography? “Easy” for me would mean going to a website, entering the URL to my website and clicking a button that says Convert to HTTPS. Period. If it’s not easy like that, then it’s not what I call easy!

Should I dismantle my Dylan bibliography because it is so dangerous? No, I won’t do that, because there is still no one who has explained to me what is so dangerous about it, or shown me any damage it has caused. Basically, I don’t believe that it’s the least bit dangerous. If it really IS that dangerous, then maybe some of the technically elite should have fixed this flaw in the Internet decades ago. They can contact me as soon as they have finished creating that Convert to HTTPS button, if they want me to change it. In the meantime, they can get off Dave Winer’s back, who has been speaking out for regular folks and working to make it possible for them to be able to freely and easily publish their ideas on the Internet for decades.

New Tax Law The President signed the new tax bill yesterday (22 Dec 2017) and it is now law. So far I have found three articles that give useful details about